Government of the Republic of Trinidad and Tobago 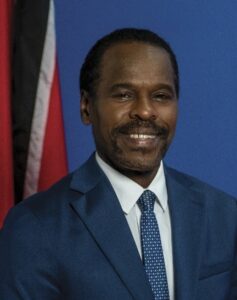 Minister Hinds has previous experience in the national security landscape, having served as Minister of State in the Ministry of National Security from June 2004 to November 2007. He made significant contributions to the enactment of legislation relating to the administration of justice in Trinidad and Tobago including the Kidnapping Bill, the Firearms Bill, the Police Service Bill, the Police Complaints Authority Bill and the Evidence Amendment Bill.

Minister Hinds is a former member of the Trinidad and Tobago Police Service, having enlisted in 1976. In 1979, he was appointed a Training Instructor, educating recruits in drill; the art of weapons; and martial arts.

Prior to his appointment to the Government of Trinidad and Tobago, he served as a practicing Attorney at Law for more than twenty (20) years. He is a graduate of the Queen Mary and Westfield College, University of London where he earned a Bachelor of Laws Degree in 1988. In 1992, he obtained a Master of Laws Degree, specialising in Government and Constitutional Law, and received his Legal Education Certificate (LEC) from the Hugh Wooding Law School in 1995.